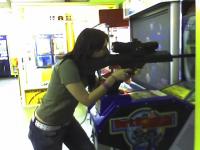 People may say women are treated equally, ie: there's no segregation like there used to be for blacks etc but women are still not treated equally. We get paid less than men for starters. Don't forget