Over 160 screenshots taken from the trailer have been added to our gallery. Some of these are referenced in our summary of what we saw in the trailers below.

Michael's trailer shows how he is trying to maintain his and his family's luxurious lifestyle all while trying to manage his anger issues, which often come out in the form of some explosive scenes. Michael reveals he is "rich and miserable" as he talks to his therapist - something which doesn't appear to be working particularly effectively.

Franklin's trailer shows him to have a completely different lifestyle to Michael's. He doesn't have the riches, but he certainly has the street smarts and knowledge of how to handle guns.

Finally, Trevor's trailer provides a lot a comic relief as he firmly cements himself as being a hilariously disgusting and psychotic maniac. Much of the noteworthy points have already been made while looking at Michael's and Franklin's trailers, but there are a couple of things worth mentioning in this one.

So, which trailer was your favourite?

Join Kifflom for a chance to be in GTAV

Rockstar have updated the Epsilon Program website giving you an opportunity to join their enlightment seminar. What this actually is is a casting call where 5 lucky people will get their likeness put into the game! You have from now until the 27th May to enter, and you must be over 18 to do so. A similar opportunity was given to fans for Max Payne 3 last year. 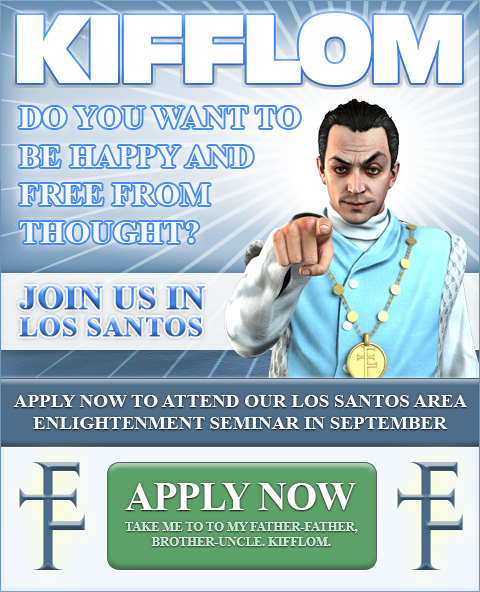 Rockstar Games is holding a “casting call” event giving Grand Theft Auto fans an opportunity to be cast as one of five Epsilon Program members in Grand Theft Auto V. If you are chosen, your features will be used to create one of the five characters in the game.

Following on from the news that we'll be getting three new trailers on Tuesday, it turns out that various gaming journalists have seen the latest demo of Grand Theft Auto V, so we'll also be getting brand new previews of what they saw next week.

The previews, which were announced today by certain gaming websites including CVG, are scheduled to go live a few days after the trailers on 2nd May at 5PM BST (12PM EST). As these are the first previews of the game to appear since November, they are certain to contain a wealth of new information.

Stay tuned to TGTAP as we'll have links to previews from all the sites we can find, as well as a detailed summary of any new information.

Rockstar have just announced new Grand Theft Auto V trailers will be coming on the 30th April! Note the plural "trailers" - looks like we'll be getting three individual character trailers, possibly a bit shorter than a standard trailer but collectively worth a few minutes of footage.

After a few months of quiet, the Epsilon Program Twitter started posting again over the last couple of days, and yesterday talked about a screensaver being released. This has led to Rockstar releasing a screensaver today which you can see a preview of and download below. The screensaver appears to show in-game scenery and some new character art.

The Goals and the Pledge of Epsilon will continue to be revealed in due time.

The Epsilon Program does not exist in just one time or place. We invite you to visit one of our enlightenment centers.
Directions will be provided in one week's time.

The Epsilon Program is an obvious scam cult and a fictional parody of the real life cult known as the Church of Scientology, as well as a elements seen in a number of religions. The program was first seen as a teaser site for GTA: San Andreas and was referenced in later games including GTA IV. It may be worth noting that the real Church of Scientology is based in Los Angeles where GTA V is also set, so how much Epsilon will feature in the game remains to be seen, but it could play a bigger role than it has done in the past. We speculate this simply due to the game's focus on money - something that both real life Scientology and in-game Epsilon both attract easily.

GamerSpawn last night live streamed a 45 minute documentary on the history of the Grand Theft Auto franchise, and the video of this is now available to watch as and when you want. For those who might not have heard of them before, GamerSpawn's YouTube channel racked up a substantial number of fans a couple of years ago after creating two great documentaries on the history of the Battlefield and Call of Duty franchises, the latter of which I felt was particularly good having been a huge CoD fan myself since the first game was released back in 2003.

Back on topic, GamerSpawn's latest documentary focuses on Grand Theft Auto. This well narrated film is an enjoyable watch and will surely bring back a lot of good memories for those of you who have played all the games. For those who are perhaps newer fans to the series you will find it particularly insightful, and if you haven't played some of the earlier games I would certainly recommend getting hold of them. While many of you may know everything there is to know about Rockstar and GTA, there are plenty who won't, and if you're one of those people, be sure to give this a watch - you'll learn a few interesting things about the company and the games.

Of course, covering the history of Grand Theft Auto isn't a new thing, and no doubt many of you will have read articles over the years which tend to come out during periods between releases. If you enjoyed watching this, GameTrailers' Grand Theft Auto Retrospective was also particularly notable, and we'd recommend watching that too if you have the time.

Presenting two new artwork releases, both glimpsed in our recently revealed official Grand Theft Auto V cover. This Cash and Carry pair of illustrations depicts Michael and Franklin getting things done – by sea, or by land.

Of course many other modes of transport will also be available to accommodate your travel needs across Los Santos and Blaine County on September 17th...

Click the images below to see the full versions or head over to our GTA V Artwork page to see more. Lots of different resolutions can be grabbed via Rockstar Downloads. In honour of the recent releases of Liberty City Stories and Vice City Stories on the PlayStation Network, Rockstar have released high-res digital versions of the original printed maps that came with retail copies of the games. This follows on from a similar move they made last December with high-res GTA trilogy maps after the arrival of GTA III, Vice City, and San Andreas on PSN. Click the thumbnails below to see them in full size. Rockstar have updated the Kubrick collection on the Rockstar Warehouse with the addition of a San Andreas box set released for the first time today. The Vice City set has also been re-released in special 10th Anniversary Edition packaging, with the original sets having sold out a long time ago. Additionally, the GTA III set is still available, with only 200 sets remaining out of the initial 3000 that were made.

Check out the pictures below for descriptions and links to the individual sets.

Having sold out long ago, the Vice City Kubrick Box Set is now back in stock in a special reissue celebrating the game's recent 10th anniversary. In special Anniversary themed packaging as seen above, the set includes Tommy Vercetti, Candi Suxx, Lance Vance, Ricardo Diaz, and that bonkers ambulance chaser, Ken Rosenberg.

You can also pick up the previously released Grand Theft Auto 3 Kubrick Box Set featuring 8-Ball, Claude, Donald Love, Misty and Salvatore Leone. Only 3,000 units were ever released worldwide and we're down to less than 200 pieces currently remaining available at the Warehouse so get 'em while you can.

To celebrate this update, you'll receive a 15% discount off your entire order if you purchase any Kubrick set, Rockstar will also throw in a Rockstar Keychain while supplies last. You'll need to order by 12th April to take advantage of this offer. 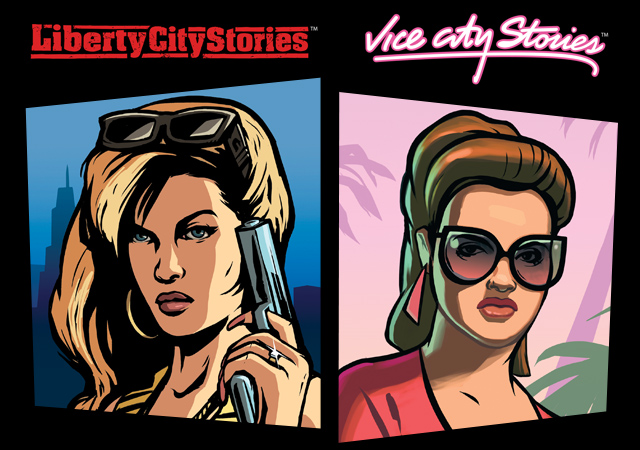 As announced last week, today marks the release of Liberty City Stories and Vice City Stories on the PSN Store, completing Rockstar Games' PS2 Classics collection on the PS3 - at least for the Grand Theft Auto franchise (other classic Rockstar titles are apparently forthcoming). Both games were originally released exclusively for the Sony PSP in 2005 and 2006 respectively, but were ported to the PS2 the following years.

From the dark, seedy and bustling streets of Liberty City's concrete jungle to the glamorous and hedonistic metropolis of Vice City in the 1980s. Two towns, each brimming with limitless delights and degradation, where anything can happen...

Wonder no more about how the finished GTA V mural will look, Rockstar have just revealed the full official cover art for Grand Theft Auto V! 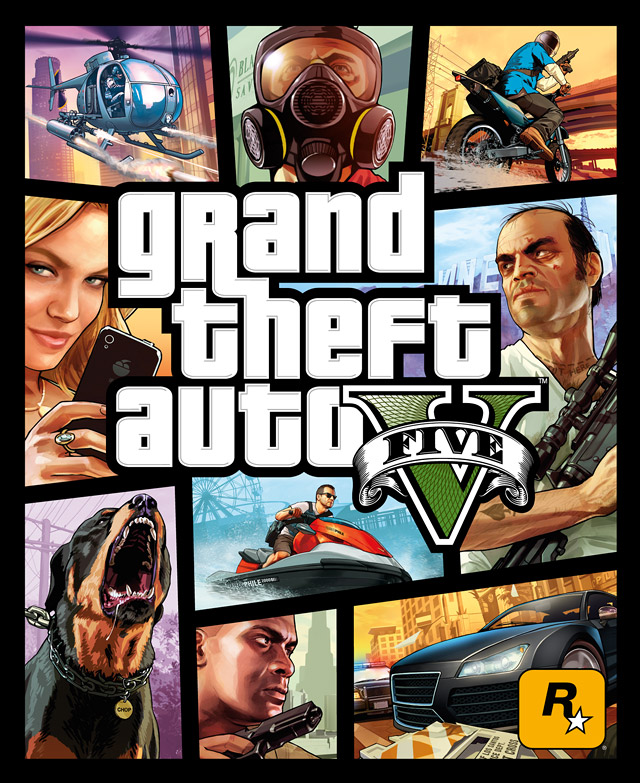 You can also grab this cover art as a wallpaper from www.rockstargames.com/downloads.