Rockstar have announced that GTA V has been delayed until 17th September 2013 in a newswire post today, allowing for "additional development time".

Today, we have an official release date to share with you: Grand Theft Auto V will arrive in stores on September 17, 2013.

We know this is about four months later than originally planned and we know that this short delay will come as a disappointment to many of you, but, trust us, it will be worth the extra time. GTAV is a massively ambitious and complex game and it simply needs a little more polish to be of the standard we and, more importantly, you require.

To all Grand Theft Auto fans, please accept our apologies for the delay, and our promise that the entire team here is working very hard to make the game all it can be. We are doing all we can to help ensure it will meet if not exceed your expectations come September – we thank you for your support and patience.

Yours,
The GTA Team

Los Santos: a sprawling sun-soaked metropolis full of self-help gurus, starlets and fading celebrities, once the envy of the Western world, now struggling to stay afloat in an era of economic uncertainty and cheap reality TV. Amidst the turmoil, three very different criminals plot their own chances of survival and success: Franklin, a former street gangster, now looking for real opportunities and serious money; Michael, a professional ex-con whose retirement is a lot less rosy than he hoped it would be; and Trevor, a violent maniac driven by the chance of a cheap high and the next big score. Running out of options, the crew risks everything in a series of daring and dangerous heists that could set them up for life.

“Grand Theft Auto V continues to push the series forward in new ways; Rockstar North are creating our deepest, most beautiful and most immersive world yet,” said Sam Houser, Founder of Rockstar Games. “We are very excited for people to learn more about the game in the coming months.”

The September release date moves the launch back from its original projected release window of spring 2013 in order to allow additional development time. The biggest, most dynamic and most diverse open world Rockstar Games has yet created, Grand Theft Auto V blends storytelling and gameplay in new ways as players repeatedly jump in and out of the lives of the game’s three lead characters, playing all sides of the game’s interwoven story.

All the classic hallmarks of the groundbreaking series return, including incredible attention to detail and Grand Theft Auto’s darkly humorous take on modern culture, alongside a brand new and ambitious approach to open world multiplayer.

As always you can share your thoughts in the forums. We're prepared for all your immature and irrationally angry comments. Remember it's a game guys. A game.

Vice City Out Now on the PSN Store 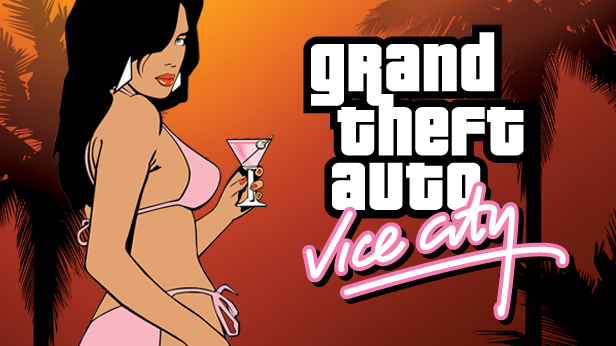 As we reported last week, Grand Theft Auto: Vice City is now available for download on the PlayStation Store, completing the GTA trilogy's availability on the platform. Released yesterday in North America and today across the rest of the globe, the game will set you back £7.99 (.99 / €9,99) with the download weighing in at around 3.5GB.

Like Rockstar's other PS2 Classics releases, Vice City doesn't feature remastered HD graphics, trophies, or any other enhancements, but PS3 players who don't own a model supporting backwards compatibility with PS1 and PS2 titles will be grateful for this release.

Rockstar have promised more of their classic titles will be released "very soon".

A GTAForums member has spotted some new artwork for GTA V being displayed in a Gamestop store in the US. On one of the pieces of artwork you'll notice a helicopter in the top left, something that has become a tradition featuring on official box arts for the games. Rockstar did tell us we'd be seeing new artwork as well as the game's cover reveal later this month. Given that there are only 5 days left of this month chances are we'll be seeing those this week, could what you see below be part of what Rockstar was planning to show us? You can see a higher res version of the promo art on the left by clicking here.

After a few months delay, Rockstar are finally bringing GTA: Vice City to PSN next week, in a move that will complete the availability of the trilogy for PS3 owners. Rockstar already released GTA III in September last year, and San Andreas more recently in December.

Like the other two titles, Vice City is being released as a PS2 Classic, meaning it won't feature any remastered HD graphics, trophies, or any other enhancements. PS3 gamers looking to complete their GTA trilogy collection with Vice City can do so on Tuesday, January 29th in North America and Wednesday, January 30th in Europe, for .99 / €9.99 / £7.99.

According to Rockstar, we'll also be seeing more classic Rockstar games being released on PSN in the coming months. 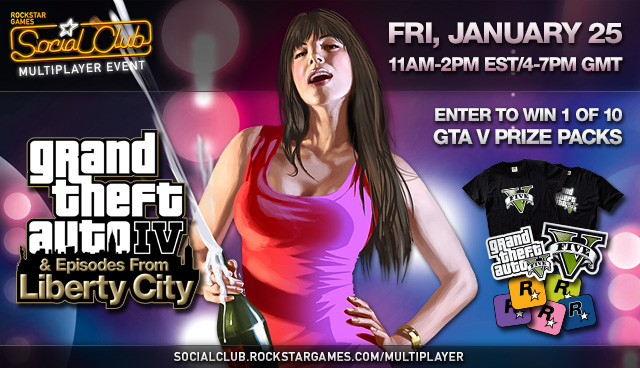 This Friday, 25th January, you can join Rockstar from 4-7PM GMT (11AM-2PM EST) and play in a variety of multiplayer modes from GTA IV, The Lost and Damned, and The Ballad of Gay Tony, on all 3 platforms.

For a chance at getting invited into a game you'll need to add one of the devs to your friends list.

During this time, Rockstar will open the sweepstakes page where you'll have a chance to win a GTA V prize pack in the giveaway, which include t-shirts and stickers.

Patrick Brown is back with another new artwork. This one shows off Franklin and Chop, as Patrick explains himself:

I really wanted to show off Chop and Franklin this time around. I love the fact that you can finally have a dog in GTA game now. What a great feature! I can't wait for this game, it's going to be great! If you're in the UK and are also one of the few people who still buys videogame magazines, look out for the next issue of Official PlayStation Magazine. If you're interested, they will be showcasing some of Patrick's artwork and have also interviewed him.

Rockstar have updated the official website today with digital versions of all the artworks and screenshots released so far. Hidden away in the update was also a brand new screenshot which you can see below. Additionally we have added updated versions of screenshots we didn't have digitally or unwatermarked before. Rockstar also said that later this month the cover art will finally be revealed. Check out our full gallery of GTA V screenshots, as well as our artwork gallery.