The San Andreas re-release we reported on the other day is out now on the Xbox Marketplace, featuring 720p resolution, increased draw distance, and achievements. The game costs £2.99 / $ 3.74 / €3,74. This remastered version is not compatible with the older Xbox Originals version, so if you own that one then unfortunately your save games won't transfer across. Look on the bright side though, you'll get to play through this great game again!

Today marks the game's 10th anniversary since it was originally released on the PS2 back in 2004. Why not fire it up on whatever platform you may own a copy of the game on for some nostalgia?

In related news, the iOS version of San Andreas was updated yesterday with native support added for the new iPhone 6 and 6+ screen sizes.

As part of the celebration of San Andreas' 10th anniversary, Rockstar have removed the Xbox Originals version of the game from sale in the Xbox Marketplace, and will be re-releasing it as part of Xbox 360's Games on Demand service. This re-release will feature 720p resolution, enhanced draw distance and support for achievements. As of yet there is no word on pricing, but we'll update this as soon as we hear anything.

Rockstar have confirmed a list of achievements that will be available on their support page. In addition to those mentioned there will also be 11 hidden achievements, if you want to know what those are you'll have to wait, as even XboxAchievements.com does not yet seem to know what they are.

NOTE: Customers who had already bought the Xbox Originals version will still have access to that. But if they decide to upgrade to the re-release on Games on Demand, their save games will not be compatible.

Rockstar successfully launched GTA: San Andreas on iOS devices last month, followed by yet another unfortunate launch on Android a week before Christmas where no one was able to actually download the game on launch day. Naturally, Rockstar made good with an update to the Android version the next day, and the iOS version also received an update yesterday fixing a few bugs, and now they have finally officially announced the game's availability with a new trailer.

Rockstar says GTA: San Andreas for mobile devices is the best looking yet, and features re-mastered, high-resolution graphics including lighting enhancements, an enriched color palette and improved character models. San Andreas on Android also supports compatible USB and Bluetooth Android controllers including the popular MOGA brand series. The iOS version also supports various controllers. If you haven't already got it you can get it for £4.99 ($ 6.99) for your iOS, Android, or Kindle HDX device from the App Store, Google Play, and the Amazon Appstore respectively. The Windows Phone version is apparently still coming soon.

To celebrate the mobile release, Rockstar will be giving away 10 limited edition prize packs filled with various San Andreas gear.

We're also celebrating the GTA San Andreas mobile release with a special limited-edition gear giveaway going on starting today til January 13th, 2014 with your chance to score some rare San Andreas gear over at the Rockstar Games Facebook page. 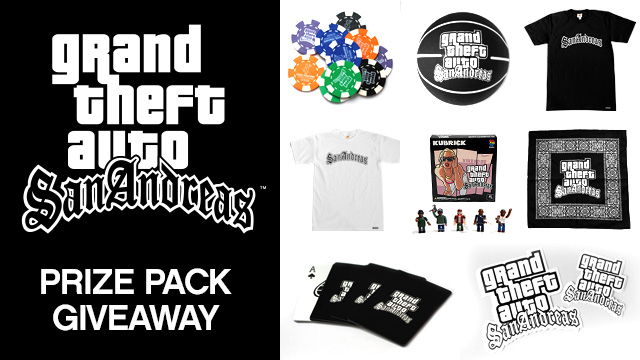 Enter now through end-of-day next Monday January 13th for the chance to win one of ten Deluxe San Andreas Prize Packs including coveted collectibles like the San Andreas Kubrick Box Set, Basketball, Playing Cards and Poker Chip Set, Black San Andreas Tee, White San Andreas Tee, Bandana and stickers.
Stay tuned as well throughout this winter season as we'll be bringing these items from the San Andreas Collection to the Rockstar Warehouse for purchase.

NO PURCHASE NECESSARY. Void in certain countries and where prohibited. Must be 18 years or older. See Official Rules and Privacy Policy for eligibility details. Ends Monday, January 13th 2014.

It's here, the epic game first released back in 2004 on the PlayStation 2 has now available today for various iOS devices! There's still no official announcement from Rockstar about it, and the game has been available for almost 24 hours now in some countries such as Australia and New Zealand. GTA: San Andreas is one of the first games on the App Store to feature full support for MFi controllers. You'll need a fairly new-ish device to be able to run this demanding game, so do check the description for supported devices before purchasing. The game will set you back £4.99 / $ 6.99 / €5.99.

Rockstar Games brings its biggest release to mobile yet with a vast open-world covering the state of San Andreas and its three major cities – Los Santos, San Fierro and Las Venturas – with enhanced visual fidelity and over 70 hours of gameplay.

Grand Theft Auto: San Andreas features:
• Remastered, high-resolution graphics built specifically for mobile including lighting enhancements, an enriched color palette and improved character models.
• Enhanced for the iPhone 5 series and iPad 4th Gen and above with dynamic detailed shadows and real-time environmental reflections.
• Physical controller support for all Made-for-iOS controllers.
• Cloud save support for playing across all your iOS devices for Rockstar Social Club Members.
• Dual analog stick controls for full camera and movement control.
• Three different control schemes and customizable controls with contextual options to display buttons only when you need them.

*To listen to your custom playlist, simply create a playlist titled “GTASA”, launch the game, and select the radio station “MIXTAPE”.

If you're an Android or Windows Phone user we're afraid you'll have to wait until next week to get your hands on this, it's unclear why there is a short delay for these two systems but let's hope Rockstar can get it out ASAP.

If you're an iOS user and your device is supported, you can go and buy San Andreas now on the App Store.

GTA: San Andreas Is Coming to Mobile Devices in December

Wow, bet some of you never expected this! Many thought that the sheer size and scale of 2004's GTA: San Andreas (in comparison to GTA III and Vice City) would mean that it would be unlikely that we ever saw a release to follow its predecessors on iOS and Android. But today, Rockstar have announced that the game that some describe as the best of that decade, will indeed be coming to select iOS, Android and Windows Phone devices in December.

Encompassing Los Santos, San Fierro, Las Venturas and everything in between, Grand Theft Auto: San Andreas has been upgraded for its mobile release. Newly remastered graphics including dynamic and detailed shadows, greater draw distance, an enriched color palette, plus enhanced character and car models make this the best-looking version of San Andreas yet.

Grand Theft Auto: San Andreas also features brand new touch controls including contextual control options to display buttons only when you need them and three different control schemes for driving and maneuvering, as well as a reworked checkpoint system for easier progression. Grand Theft Auto: San Andreas for mobile also comes equipped with full controller support, including Made for iOS controller capability on iOS7. It will be available for select iOS, Android, Amazon Kindle and Windows Mobile devices. Stay tuned for more details in the weeks ahead.

Great to see iOS controller support being added too, that is sure to raise the profile of this new capability in iOS 7. We absolutely cannot wait to get our hands on this!