On March 31st, 2008, ten Grand Theft Auto webmasters received a phone call from the offices of Rockstar Games. This turned out to be one very exciting phone call, Mike Torok explained that webmasters from the premier GTA fansites were each being invited to New York to preview GTA IV before it was released! Of course I happily accepted the invitation, it would have been stupid not to. We weren't just going to be given the same treatment as magazine editors, who were basically told what they could and couldn't do by Rockstar, no, this was going to be an all expenses paid trip to NYC, and we could do whatever we wanted in the game!

After several emails back and forth with Mike, and with Alison, who was coordinating all our travel arrangements, the flights were booked and we were all set to fly out towards the end of April. 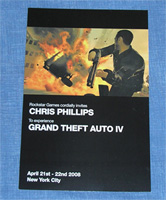 The final list of webmasters going in addition to myself:

Photos I took while sightseeing in New York can be seen on my Flickr photostream.