Ever since the release of GTA III and the Insane Stunt Bonuses that could be achieved by completing certain jumps, people have been wanting to perform bigger and bigger stunts. The late Odie helped things along with his great little stunt park mod, while the inclusion of motorcycles in Vice City propelled the scene forward leaps and bounds. I even made a couple of videos myself before stunting really got popular (by today's standards they are both absolutely awful, but show just how far stunting has come since then).

GTA V has been out for 6 weeks now, and this has been ample time for stunters to familiarise themselves with the map, find some cool spots, and get used to using and hopefully not abusing Franklin's special ability, or not even using it at all to really impress. A few early videos set the bar fairly low, and more recent videos are now coming out looking pretty impressive. Without further ado, here's a roundup of some of the first and best stunt videos that have been made so far.

First up we have couple of great videos that were emailed into us from the Nomad Union crew:

Next up is a stunt montage from Ben Buja, whose name you may recognise from his many GTA IV stunt and blooper reels:

This one is from Dejv, returning to the scene after a two year break:

And finally one from SyperDimon:

If you want more, here's some links to other nice videos that have been released:

We'd like to post about community creations like these more often. So if you've created a stunt video, or anything else cool using GTA V be sure to let us know about it and if we like it we'll include it in our next post. 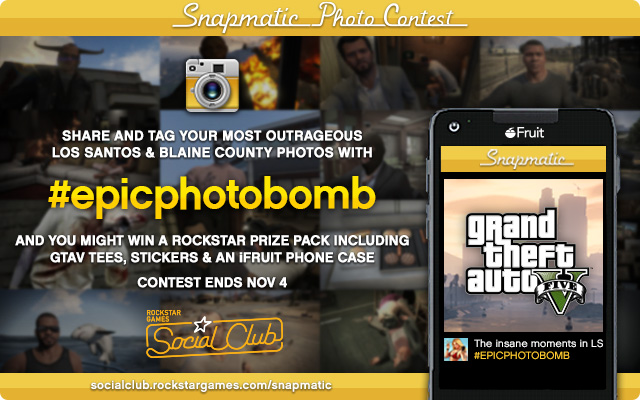 Rockstar have announced the first Snapmatic photo contest for GTAV, where you have a chance to win a Grand Theft Auto V prize pack that includes an iFruit phone case and phone decals plus an official GTAV tee and the sought-after Chop stash stuffed animal.

You have until Monday to get your entries in, Rockstar say they are looking for originality and inspiration, so be creative. All you need to do is tag any photos you want to enter with the #EpicPhotobomb hashtag, which you can do on the Social Club website. For full details on how to enter see the Newswire post.

Snapmatic photo-sharing from your in-game iFruit phone in GTAV and GTA Online makes it a cinch to snap and share that picturesque view from the peak of Mount Chiliad, the fifty car pile-up you engineered on the road to Fort Zancudo or that wild fistfight you stumbled into between Piswasser'ed derelicts at the local 24-7. Of course, all it takes is the work of one photobomber to drastically alter the outcome of whatever you were trying to capture - this shark interrupting Franklin's peaceful moment at sea being the perfect example. 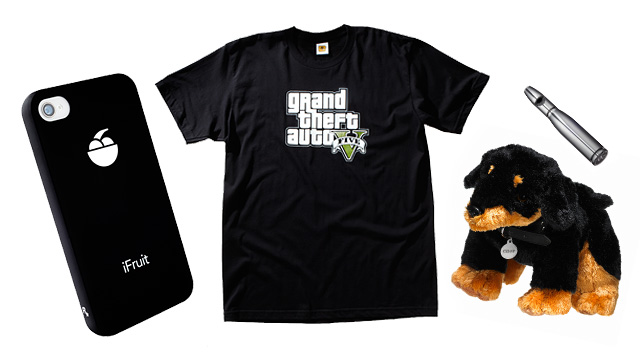 Contest is void in certain countries and where prohibited. See www.rockstargames.com/socialclub/events for official rules and eligibility details.

Rockstar released some new official artworks earlier today. Technically they're not new, but until now we didn't have high resolution official desktop wallpapers of these. First up is Chop standing guard after tearing up some Balla scum, while owner Franklin deals with the FIB using his Heavy Sniper. Take Two released its second quarter 2014 earnings report today, in it they revealed that they've sold-in (shipped to retailers) 29 million units of GTA V so far in the first 6 weeks. To put things in perspective, this is more copies than GTA IV sold-in in its entire lifetime.

The press release went on to mention more records, including those we posted about last month:

We believe Grand Theft Auto V is the fastest-selling entertainment release in history, grossing over $ 800 million in retail sales during the first 24 hours after launch and over $ 1 billion in only three days. Grand Theft Auto V became available for digital download through the PlayStation Network on the day of release and became the biggest release ever on the platform. In addition, the Games on Demand release of the title on Xbox LIVE became the highest grossing day 1 and week 1 release in the platform’s history.

For most games, breaking the 1 million sales figure is a HUGE achievement, for Rockstar this would have been an unmitigated disaster. Today's announcement means that GTAV is now placed 7th on the list of best-selling games of all time. In case you missed it, Rockstar have posted a quick update on the state of GTA Online, including the GTA$ Stimulus Package that was promised. Read below for details on upcoming features and additions.

THE GTA$ STIMULUS PACKAGE
We know many of you are anxiously waiting for us to show you the GTA$ Stimulus Package money we announced a couple weeks back. As mentioned in that post, we of course want to ensure that game progress loss issues are sufficiently sorted before distributing the GTA$ to everyone. We have a few more tweaks and fixes to make in a new title update that will hit sometime next week and then we will distribute the cash.

THE BEACH BUM PACK
Coming in early November will be the first add-on content update, the Beach Bum Pack which will bring all-new beach themed vehicles and new weaponry that you’ll be able to use in both GTA Online and Story Mode. Plus new customization options for your GTA Online character including new tats, hairstyles and more. We’ll also be adding lots of brand new action-packed Jobs to play with Gang Attacks, Survivals, Last Team Standings, Parachutes, Deathmatches and Races that will have you bloodying up the waters and coastlines of the finest beach resorts across Los Santos and Blaine County.

THE CONTENT CREATOR
We are also working to bring you the debut of the first part of the GTA Online Content Creator this fall – giving players the ability to craft, publish, rate and play custom-made Deathmatch and Race Jobs. We’ll be keeping our eye open for exceptional ones that we’ll be stamping as ‘Rockstar Verified’ and will be featuring them here at the Newswire and as part of forthcoming GTA Online Social Club Events. Both the Content Creator and the Beach Bum Pack are free.

Stay tuned as we hope to have more information with more details and specific timings on these content updates as well as on GTA Online Heists and the new GTA Online Capture the Flag mode to share with you next week. We will also have initial details on more additional content coming for both Story Mode and GTA Online in the next few weeks. 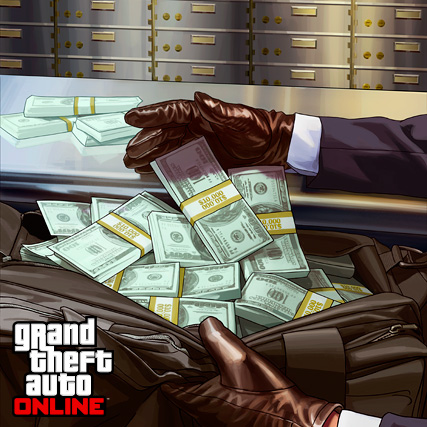 Rockstar have finally let us in on some more details for GTA Online, including the all important question: "when will we be able to play!?"

A small patch will be rolling out on Xbox Live and PSN servers starting early morning in the US, that's from about 7 AM EST, so from 12 PM in the UK, early afternoon in the rest of Europe. Once this has been downloaded you should be able to access it. Remember you can jump into online by selecting the 4th (bottom quadrant) in your character selection wheel. Many people have been asking when GTA Online takes place, some were incorrectly told it follows on from GTA V, it doesn't, it is set before GTA V. Rockstar have now confirmed the events take place a few months before GTA V's story starts.

There's a lot more information Rockstar have provided, which is quoted below.

Finally, there's some exclusive content available for those of you who are Social Club members, which should be everyone by now. Read on for details on what you can get access to. 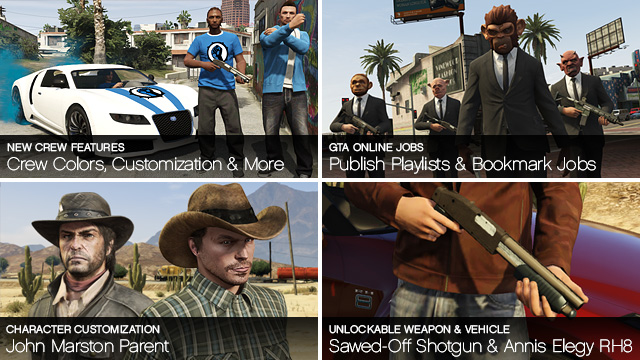