Viewing news posted in May 2013

Rockstar have today released a much needed update to Grand Theft Auto III for iOS. Version 1.30 of the game adds features that many players have hoped would be added, myself included. The full change log is as follows.

*To create a custom playlist, create a playlist in iTunes titled “GTA3”

iPhone 5 support and iCloud save games and sync support are an extremely welcome additions which we're sure many players will be happy about. Two other noticeable yet unmentioned fixes include a slightly refreshed app icon, as well as this they have finally fixed the name of the app, which now correctly says "GTA III". Lovely stuff. 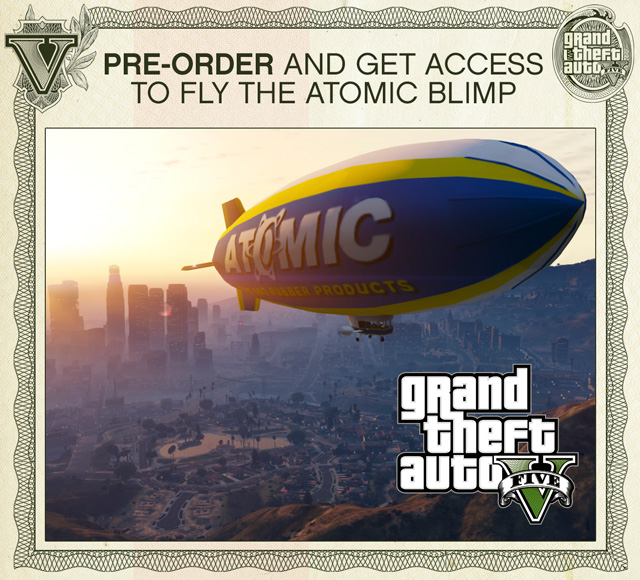 Rockstar have just announced two special edition versions of GTA V that are now available for pre-order, and unlike other games (such as CoD) which bundle stupid, pointless crap with their game, Rockstar have included some pretty nice stuff with theirs. All pre-orders will additionally get access to pilot the Atomic Blimp (pictured above), "hawking Los Santos’ finest tire company (whose products are available in any LS Customs garage)."

First up, the Special Edition, this includes:

Collectible SteelBook with Exclusive Artwork
This special SteelBook features double-sided, never-before-seen artwork of Michael, Trevor and Franklin. Custom color and metallic treatments bring out the detail of the artwork created exclusively for this SteelBook.

Blueprint Map
This exclusive, additional 21.5” x 26.75” map displays a blueprint view of Los Santos and Blaine County. Cryptic markings indicate locations for fast cash and other points of interest for the up-and-coming entrepreneur.

Bonus Outfits, Tattoos and More
Michael, Franklin and Trevor get bonus outfits in their wardrobes, character specific tattoos at tattoo parlors, and special deals from shopkeepers across Los Santos and Blaine County.

Additional Weapons
When visiting Ammunation stores in single player, merchants will have special weapons in their inventory available for free: the Pistol .50, Bullpup Shotgun and melee Hammer. 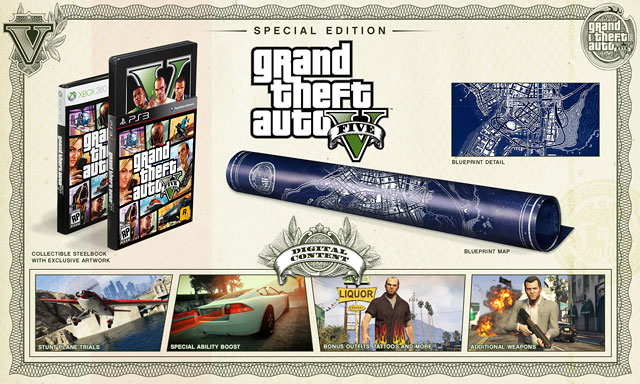 Unique Vehicles and Garage Property
Players will instantly receive a garage to store custom vehicles. In single player, the garage will be stocked with the 1930’s style Hotknife hotrod and the CarbonRS sports bike. In Grand Theft Auto Online, players will get the high-end Khamelion electric car. 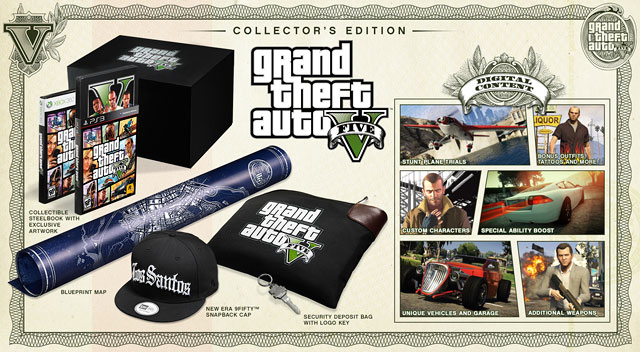 Look for online pre-order links to be updated at www.rockstargames.com/V/preorder starting later today.

Remember those three new screenshots we saw from EDGE Magazine last week? Well Rockstar have added high res digital versions of them on the official website now, along with a brand new one too.

See all the GTAV screenshots in our gallery.

Rockstar have released some official wallpapers featuring artwork of the three characters that were originally seen recently after the release of the latest trailer. These artworks are expanded a little offering more detail, and are of course available in a multitude of resolutions to suit any device you might use. Check them out below in full size, or head over to the Rockstar Downloads page to grab them in different resolutions. You can also check out our own GTAV artwork page to see all the stuff released so far. According to Rockstar we'll be seeing more artwork in the forthcoming weeks.

Expect to see more GTAV digital artwork released as widescreen desktops in the weeks ahead, including official version illustrations of some friends, family members and other known associates of our three main characters

The latest issue of EDGE magazine is out with their GTA V preview, and in it are three new screenshots not seen in previews from earlier this week. The magazine pages have been uploaded in this GTAForums thread and we've included the new screenshots below.

There doesn't actually appear to be any substantial new information in the preview, though there are a couple of interesting points mentioned, including the fact that Franklin's descent from helicopter to ground took around 3 minutes to complete when Rockstar started the demo. We haven't done any maths around this but that should give you some idea of just how massive the game is. One other point that mag makes is that it claims a lot of character switching happens automatically, which is contrary to what other previews wrote, saying we would get quite a lot of freedom around when we choose to (or not to) do this. That said, they may just have been referring the particular mission Rockstar were demoing.

We'll update this post if we can get our hands on high res digital copies of these new shots.

GameInformer has come up with the goods once again in the latest issue of their mag, with twelve beautiful new screenshots, which you can see in all their glory below.

UPDATE: Rockstar later posted these screenshots on the official website and Newswire.

All these and more can be seen in our complete screenshot gallery.

While the recent GTA V trailers, previews and screenshots have overshadowed pretty much every other announcement in the GTA scene this week (and quite rightly so), that's not to say there's nothing worth reporting on. A couple of popular modifications and tools received updates over the past couple of days too.

MTASA 1.3.2 Released
First up is a new version of MTASA. That's the popular multiplayer modification for GTA: San Andreas for those of you who might be new to the franchise. MTASA 1.3.2 fixes a substantial amount of bugs, and also introduces useful new functions for those of you who make maps and create mods for the game. You can read more about that in their announcement post, or check their wiki for a complete list of changes.
The MTA team also announced that they will be switching to a rapid release cycle. The team currently pushes a new release every 3-6 months, this change basically means the team will aim to release an update every month, rather like the release cycles users of Chrome and Firefox web browsers will now be used to. The more frequent updates will mean less major changes in each iteration, but will allow for fixes and small feature updates to be pushed out a lot faster than before. In general this is pretty good news, the only downside can be the ridiculous version numbers we end up with.

Good news for those of you who make mods for Grand Theft Auto IV. GooD-NTS has released another update to his OpenIV tool, five years after the project originally started, and an update which will apparently be the last at least in terms of adding major new features.

The new features in this release are quite big indeed, though. The first is the ability to create your own unique animations for peds and objects, the second is the ability to create completely new custom cut-scenes. Other new features include an animation viewer for peds and objects, cutscene viewer, package installer (to make installing and distributing mods for GTAIV easier), new UI for the texture editor, and finally the ability to set file associations in Windows Explorer so you can open files directly in OpenIV.

Today's previews and screenshots have now started to surface. You can see all the new shots by scrolling to the bottom of this post, and below that are links to all the articles our summary of new information is sourced from (mainly CVG).

In the big ones, there can be no mistakes: you need the right weapons and gear; you need to choose the right approach, whether it's brute force, or stealth, and plan out your tactics via a pre-mission corkboard; and you need to have hired the right crew for the right job - that's crew in addition to Michael, Franklin and Trevor. Choose to pay less and you get less qualified personnel; pay more, and you get more reliable drivers, gunmen and technicians - but they take a bigger cut. It's a balance, and it's through missions like 'Blitz Play' that you find your best approach.

If you have an hour to kill, we recommend checking out CVG's preview on YouTube, it's basically more or less the same information that we've summarised here, but in greater detail. Press play and leave it running in the background. The following publications have written previews of what they saw in the demo Rockstar showed them in the last few days:

Many non-English publications also have reviews, below is a comprehensive listing of them sorted by language.