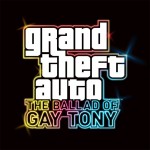 Episode 2 of the Xbox 360's exclusive downloadable content was announced in late May 2009. The first few screenshots were released some months later.

This episode's focus on high-end night life contrasts with the biker gangs portrayed in The Lost and Damned, whilst giving us a lot of new gameplay possibilities." Grand Theft Auto IV's second downloadable episode, The Ballad of Gay Tony injects Liberty City with an overdose of guns, glitz, and grime. As Luis Lopez, part-time hoodlum and full-time assistant to legendary nightclub impresario Tony Prince (aka "Gay Tony"), players will struggle with the competing loyalties of family and friends, and with the uncertainty about who is real and who is fake in a world in which everyone has a price.
- Dan Houser, November 2008