A few gaming sites have put up a dozen new multiplayer screenshots of GTA IV today, you can check them out on French site GameKult.com and GamerSyde - both these sites have broken the embargo placed upon them, as these were due to be revealed tomorrow in new multiplayer previews from sites such as Kikizo, IGN, CVG, GameSpot and GamesRadar.

Thanks to toxic546 for the heads up.

I'm sorry but this screenshot looks absolutely horrible... Just look at the details on both their face's. They look like they've been painted on.

I hope this isn't what the finished version will look like.

I'm not to impressed with the new screen shots either. The graphics just look washed out and downgraded for multi player compared to the single player mode.

But, one has to remember that the whole city will be accessible during online play with up to 16 players and 15 different modes. So, mabey they had to sacrifice quality over quantity a little bit for the online game to run smoother. Its not that big of a deal as it could be alot worse, there could be no multi player at all

I am behind Rockstar 100% but when you see some of these screens that they have released lately, The graphics look rubbish. Still you can never really tell 100% whether they are the true quality of the graphics, as Screenshots can be blurry depending on how they where captured. Still for these ( I Assume ) to come from Rockstar, you would think that they would make sure the quality is up to a good standard....... 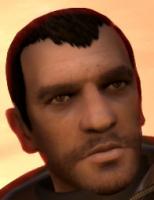 I agree with you 100 percent

I checked out the site this had originally been released on, before the screens were removed and found some of the info.

They say that the graphics have been toned down slightly for multiplayer, to allow for smoother movement and game play. Now, I feel these new screens can reflect the actual game play, but will not look like this. Have you noticed some of the screens we got a little while back seemed kind of choppy and such? And seeing the new Trailer, and the commercial for game stop, we can tell that the game looks much better in action than these earlier screens we had criticized.

I think that these screen can be compared to those earlier screens in terms of quality. They won't be as good as single player, but that doesn't mean they're bad. Multiplayer will probably look much more polished in game. Anyways, how much time are you gonna take to stare at you and your enemies' character and clothe details in the middle of a gun fight?

I do agree that the textures look a little downgraded one shot can't make a difference?

I agree with you 100 percent

I agree with you also, i play GTA for gameplay NOT Graphics. Still you cannot keep saying that, we are dealing with a Next Gen game and there is a standard of quality we should be getting. I am not saying that this is the graphics of the game, i am saying that these screenshots are poor quality. San Andreas was not amazing graphics but the gameplay was on a EPIC SCALE. Still i can not really call the graphics on San Andreas. As the draw distance, character modeling and world design was immense....Same will apply to GTA 4. I just would like them to show its full potential, instead of releasing these tatty screenshots.....( DO NOT GET ME WRONG, SOME OF THESE PICTURE ARE AMAZING

I think they have employed the wrong guy over at Rockstar!

OK, if you want the best graphics, go buy Gan Turismo prologue. Almost Photorealistic. However, you race round and round and round a track. Pretty crappy if you ask me. Graphics - great... Gameplay - not so.

GTA is on the other end of the spetcrum. It doesn't rely on Graphics like Gran Turismo has to, because it's gameplay is surpassed by nothing. You cannot base your opinion of A game on simply screenshots, you can say it looks nice / crap, but that's about it. These screenshots are development screens. They have also had to have been captured from a console and ported to PC, which may not be the most detailed / accurate / efficient way to get good looking screenshots. In almost any gaming magazine, you get pixeltated screeenshots, but the final game, completed and optimised for your TV / monitor looks so so much better. You have to take more into account than: 'Screenz r shit so gaym iz 2'

On top of which, the graphics may have to be lowered for online play, as more processing power is needed to gain info from the game server, and transform it into things on your screen, and then having you be able to interact with them.

You were all blown away by San Andreas, Right? This is a next gen game, next gen console, next gen engine, next gen graphics.It' going to b awesome, no doubt.

^ Sure graphics don't mean everything, but you can't say it doesn't make the game a hell of a lot better.

But whatever, i'll shut up now... It's going to be great. And with less than three weeks till it's release i'm happy.

I think my initial post was misleading, as far as my thoughts on the graphics were.

If this is what rockstar has to do to make the game run 100% then I'm all for that.

It's just it comes as a surprise and is somewhat of a disappointment they've had to do this, because up until now most of us were under the assumption the multiplayer graphics would be on par with the single players.

Some people are never happy. Just be thankful there's a massive multi-player mode in the first place. Sure, the screens look quite average, but what did you expect, seeing as the WHOLE city is available to roam around in, with up to 16 players blasting chunks out of each other at the same time? I'm delighted there'll be lots of multi-player modes, and as soon as I sort out my PS3 connection, I can see myself wasting day after day on it.

A lot of these screens are closeups and pay attention to detail (faces, hands etc). We are gonna be looking from behind the characters and constantly on the move. We will not notice these small imperfections when actually playing the game.