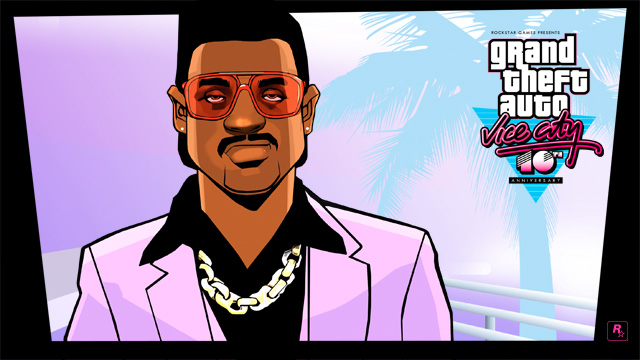 As part of the celebration of Vice City's 10th anniversary, Rockstar North producer Leslie Benzies and Art Director Aaron Garbut have given interviews to Digital Trends, Crave Online and T3.com. There's a lot to read from all three publications but we've selected a couple of choice quotes that we think are interesting.

Firstly, here's one Rockstar selected themselves, with Aaron talking about iconic moments in Vice City that had a lasting impact.

For Vice City, there were a lot of moments that just clicked. When we first blocked in the map and drove about it for the first time; when we put in the helicopters and flew over the city; seeing the dancers in the club; driving down Ocean Drive at night; putting in the hardware store for all the less conventional weapon; the first time we had the player change clothes; driving over ramps in boats; smashing up a car with a hammer for the first time; being chased by golfers as I ran off in their golf cart; seeing the models of Love Fist for the first time; driving around on a moped the day they went in… It’s 10 years ago but these and so many other moments are still clear. It’s fantastic seeing a game evolve, especially when it happens quickly. Seeing everything click into place, having the opportunity to poke and prod it, try things out and learn from it all. Tiny things can be seminal moments.

And another one from Aaron, who explains that originally they wanted to include more countryside in Vice City:

We had talked about doing the Everglades. I think we even roughed some of it in. That would have been great. Basically expanding out of the city into the surroundings would be good, you get such good contrasts, but that was something that we devoted a lot of energy to in the later games.

Finally, Les had this to say on the possibility of Vice City returning in a future GTA:

It is always a possibility. There are a few references to the city in our current-gen GTAs so it is part of that HD universe, and it is certainly somewhere we would love to revisit. However Vice City, perhaps more than any other GTA game, was as much about the era as the setting. Miami in the 1980's is so iconic it would feel strange to revisit the city in a different time period.

Of course at some point we would like to have one big world containing all our cities and let the player fly between them and revisit their favorite areas, and in that context reimagining Vice City would be very interesting.

That last sentence is something to think about. I can't count the number of times I've seen that requested in wishlists posted on our own and pretty much every GTA and gaming forum out there. Makes you wonder what next-gen GTA titles might have in store for us...

Head on over to Digital Trends, Crave Online and T3.com to read the full interviews.

Every little word out of a Rockstar employee's hole is something to think about... Let there be hype...